Given my previous debacles with visas (turkish residence permit and the well hidden kazakhstan embassy) I was a little sceptical about the ease I had been promised for an Azerbaijan visa in Batumi. But I needn’t have been. After a shockingly quick 2hrs, all 3 of us, plus another cycling couple we met outside the consulate, had Azerbaijan visas without any of the hassles of Letters of Invitation or delays and extortionate expense we were hearing about from other embassies. We were a little shocked – me so much so that I stubbed the end of my toe off as we were walking back to the hostel! After a few more days relaxing and preparing in the home-from-home atmosphere of D’vine hostel in Batumi we set off again to explore Georgia. Much had been promised to me about what a wonderful place  it was to travel and it didn’t dissppoint. 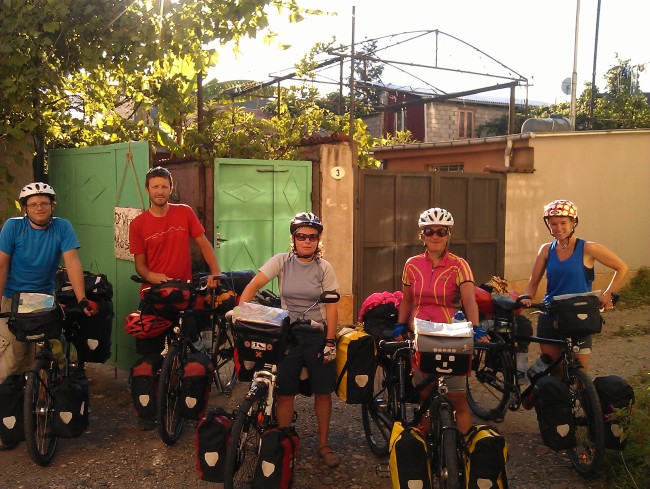 It was a veritable bicycle cavalcade that left the hostel; I was continuing to ride with Mark and Claire, and the Swiss/Aussie couple of Annina and Paul (who we had met outside the consulate and were also staying at the hostel) were heading the same way through the mountains, so we all trailed out of the strange city that is Batumi. It has been heavily invested in over the past decade to try and sell it as Black Sea-side destination but the sporadic architecture and half finished building facades just present a very confused image with no real sense of identity. It also doesn’t take a very long detour from the main areas before you see the real state of buildings and day to day lives of the Georgians living there. As we left the sea behind us the road wound inland following a beautiful river valley, through increasingly spread out villages. We were treated to idyllic spots to swim and camp by the river for a couple of nights, meeting a french recumbent tandem couple for one night, taking our total to 7 and receiving warm welcomes from the locals on and beside the road.

The first mountain pass was just over 2000m and involved 40km or so without tarmac – both new experiences for me. In the town of Khulo we stopped for some supplies and soon attracted a crowd of curiosity and drunk bravado. One guy with a creditable beer belly was proudly telling us he had already drunk a litre of vodka (it was around 4 or 5pm) and we should go with him to his house and spend the evening there drinking with him. He was indicating his village was over the other side of the valley, connected to Khulo by a rickety old cable car that looked a  lot like a baked bean can suspended from a washing-line. As the cable car creaked into action we assumed this would be how he would be stumbling his way back home, but 10 minutes later he weaved past us in a beaten up old car, continuing to extend his invitation of more vodka! As we left the town the tarmac promptly came to an end and a bumpy downhill gravel section made me regret buying and volunteering to carry 8 fresh eggs for dinner – but they survived in tact!

The following few days were new highs and lows for me. Without the tarmac the 30km or so climb to the pass was incredibly hard riding and the highest ı had ridden on a bike. Carra decided she would slip out of Granny gear periodically which would cost me all my momentum and starting off again uphill on the loose surface with all the weight of the bags was very difficult. In one small village I received a very welcome push round the corner from 2 smiley, chatty kids. The boy was just skin and bones but bless him he put a Popeye strength effort in and for a few seconds I was winning the uphill battle. We had left as the sun was rising to try and make the pass before too much of the heat of the day arrived but as midday approached it was still a daunting sight above us. We all made it eventually but I had demanded too much from my body. After trying to eat some lunch and a little snooze I woke up feeling very sick. An extended visit to the long drop (in a wooden hut next to the only cafe among the few small shops mainly selling beer and vodka) at the pass let me know I was in for a rough ride down. I tried to enjoy the stunning scenery and tumbledown village houses as we started descending the gravel track but 30mins later I projectile vomited in the middle of the track and more annoyingly on my own feet!!

Waves of nausea and dizziness continued for the rest of the afternoon and despite the best efforts of a local bar man to cure me with Cha cha (the local moonshine) we had to find a camp spot for me to collapse and adopt a nil-by-mouth approach. Thankfully it seemed to just be heat stroke/exhaustion and despite being incredibly hungry and pretty weak I was able to cycle on a little further on the track the next day, ironically until just after the tarmac returned my energy level once again flatlined. So I hitched a lift the last 20km to the next town where my cycle buddies found me asleep on a bench outside the church before checking us in to a hotel and a rest. Being ill on the road is never fun but in a funny way I timed it really well (by being with company) as Claire, Mark, Annina and Paul took really good care of me and then we used it as a bit of an excuse to have a day off. We shared a taxi (driven by Boris the tank driver) to visit some beautiful fortresses and cave monsatries (Vardzia) in the nearby valleys and relax for a day, escaping the heat that got upto 37.5C. Back on the bikes (and a little bit recovered) we climbed again onto a huge and stunning plateau that was dotted with cattle farmers (and their occasional guard dogs), breath taking views, remote villages with walls of cow pats drying for fuel and a completely out of place international train station development. All along the way we would receive more enthusiastic horn beeps and shouts from passing cars and in some of the villages near the plateau lakes we would see the kids running down to the roadside as news of ‘tourists’ came through to smile, laugh, wave and if they were really brave – stick their hands out for high 5’s.

During one lunchtime stop just before the 2225m pass off the plateau we were relaxing in an idyllic spot by the lake when one of the herds of cattle were driven down to the water to drink. Within minutes we were totally surrounded by hoofs and udders and Carra was getting a lot of unprecedented attention from our bovine friends. Not wasting the water supply the cows then gave a pretty good show of drinking from the lake at one end whilst filling it back up at the other end. I had just 10 minutes previously had a wash in that lake and began to regret my decision! As we were pushing the bikes back onto the road I slipped and fell with all my weight plus Carra’s onto my left knee. There was the horrible stabbing pain and a little bit of shock but superficailly the only dammage seemed to be a cut across the kneecap. Back on the main road a lone german cyclist stopped to talk to us coming the opposite way and a white van man handed us cycling gold from his window – a big bag of biscuits (In georgia you buy biscuits like pick ‘n mix by the kg – genius!). Not long after we started cyclng again I could feel my knee trying to swell up and as each rotation of the pedal was trying to prevent this the pressure began to build and it got more and more uncomfortable. The summit was only a few kms away but I was really annoyed that it was my second one (and highest so far) that I could not properly enjoy.

The descent offered some respite but the following couple of days into Tbilisi involved regular breaks to alleviate the presure and swelling in my knee. One very good cure for pain though is adrenalin through terror and arriving into Tbilisi in the evening traffic dealt with that. All senses were on over drive as we tried to dodge the traffic emerging from all angles, even in the tunnels, whilst dodging pot holes and finding our way across the city to our host. But Vaqso and Tornike met us with big hugs and an evening of Grandparents’ homemade wine, cha cha (think homemade schnapps) and cheese and made us feel incredibly welcome. We spent the weekend with them, exploring the city a little, hunting for bike shops to do some repairs to Carra and eating Khinkhali (Georgian meat dumplings). We had been so blown away by the beauty of Georgia and the (partly alcohol fuelled) happiness and warmth from the people we had met that we were reluctant to leave. But Azerbaijan was waiting for us across the border and with our visas dated the clock was ticking. Leaving Tbilisi (a day later than planned due to some more beer in the park) we tested out the bypass – marked on the map and equally fooling several Turkish truck drivers. Because 15km or so out of the city the tarmac disappeared once again and we struggled alongside big lorries in sticky heat and dust. Just 3 days later, first thing in the morning we were queued up in front of the Azerbaijan border, having just spent our last Georgian Lari on more biscuits by the kg (the currency being called lari was a constant joke that Larry was paying for everything!) with more trucks waiting for the border to open. The sign above the road said “Azerbaijan border. Goodluck” – we hoped we wouldn’t need it!

3 thoughts on “The Georgian mountains – in good company”